When we bought this place it was a piece of a property that was once a dairy farm. At one point it supported 150 head of cattle but the land was split up before it became ours. The part with the house on it was not part of the purchase. However, we did get 12,000 square feet of barns and almost 35 acres! The barns were built in the 1970s. To support the cows there are also two large tanks underground for water storage. Even during the extreme drought we experienced a few years ago, we felt no impact. The pond which is fed by at least two springs didn’t suffer either, even though we were watering from it daily. The pond capabilities and the tanks were two happy surprises we discovered after we took ownership.

Other surprises included the fact that the woods featured plenty of sugar maples and the fields were already certified organic by a neighbor whose cows and horses grazed here. He still hays a few of them but has let the organic certification lapse. We have always maintained organic practices in all of the fields and growing areas. 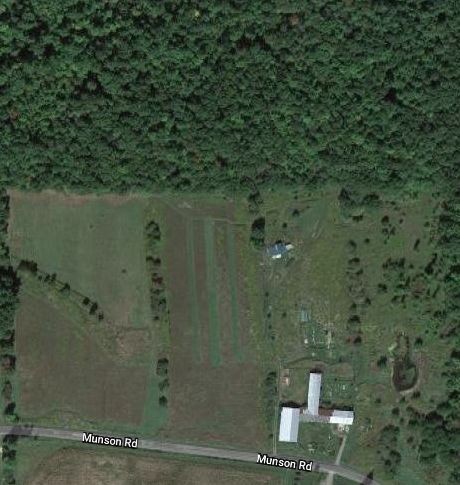 Since then… (2005)
Two of the barns have concrete floors and metal siding and the other is a large pole barn (100′ x 50′). One of the barns with concrete floors has been converted into a south facing greenhouse with twinwall on the side and roof. The cow stalls have been converted to about 250 linear feet of 4′ wide growing beds which we use in winter months to grow lettuce. Both long barns are wired with electric. 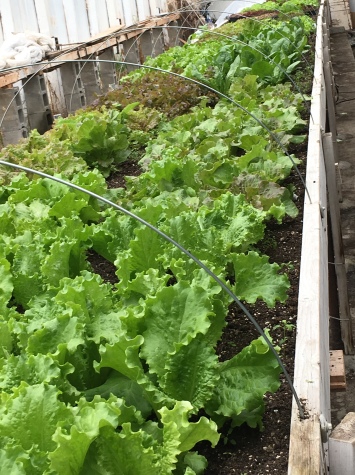 Living Spaces
One end of the greenhouse barn was converted into a dwelling unit. It is where we live now and it has a full kitchen, bathroom, bedroom and living area with a Quadrafire stove. It also has electric baseboard heat and a fully equipped laundry room.

Another house, designed to operate off-grid, is slowly being built at the top of the hill (1500 feet elevation) and it offers a 270 degree view. The other 90 degrees face north and the woods and are bermed for insulation. Generous windows face south and provide passive solar heat along with the attached greenhouse. A second floor room provides a chimney effect for cooling. The walls are made from ARXX blocks (6” of poured concrete between styrofoam forms). This house can easily operate off-grid as it is wired for 12 volt and has solar panels with a battery pack. For heating and cooking there is a large (new) cookstove. It also is wired with limited 120V. Cabinetry and closets are Amish-built in Shaker style maple. It is ideal for glamping with its full bathroom and summer cooking done outdoors or with a microwave. It has one or two bedrooms, depending on how you look at it and it can easily sleep six.

The Grounds
The woodlot includes those wonderful maples, but also other trees such as red and white oak, hickories, beech, witch hazel plus ramps (wild leeks that we have introduced, year after year). The growing spaces include a hoophouse  and multiple growing beds that add up to 1-2 acres of highly ameliorated soil that was enhanced with home grown compost, organic composted cow and chicken manure, mulches and coffee grounds (buckets and buckets and buckets from our restaurant customers) over the past 14 years. We have also planted bunches of hazelnuts, currants, willows, chestnuts, and grapes as well as other food producing plants (from apples to aronias) all around the property. See our growing list here.

Amusements
Located near the FLX hiking trail and snow mobile trails run through (currently, but this is optional) and around the property.  Hammondsport and Keuka Lake with two public swimming areas, plus shopping and restaurants is eight miles away.  Watkins Glen and Seneca Lake with one public swimming area, shopping and restaurants is 15 miles away. Both lakes offer plenty of boating opportunities. Watkins Glen State Park and Watkins Glen International Race Track are both nearby as well as Corning Glass Museum and the Rockwell Museum (A Smithsonian Affiliate).